Did I mention that I have bought a house?  I can't really call it a new home since it was built in 1902.  I can't call it my dream home either, but with some renovations it is getting better.  And I can't call it a second home since it is the one I will move to when all the construction jobs are done.  Then I will have the delightful fun of trying to sell my present home.  But this will be my home when I am able to move, hopefully before the summer. 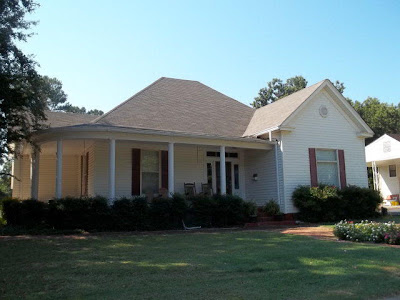 My grandson, Cole, has been complaining for years about me living 7 hours away (not remembering, of course, that is was he that moved.)  After his Grandad died he was asking me almost daily when was I going to move close to him.  So, I thought that when I actually picked a house 3 minutes away from his that he would be thrilled.

Not so!  When I told him which house I was buying suddenly he was mad.  He quickly informed me that I was not moving close enough!  He had decided that I needed to live in the same house as him, or at least on the same street.  So for the month I was waiting to close all I got was black scowls and frowns every time my new house was mentioned.

Then after the closing we drove over to take a look at what I had bought . . . with Cole grumbling the whole way.  But that's when we discovered that the sellers had left the swing set and play fort in the back yard, and there were lego pieces littering the front walk.