This has been a particulary exciting week.  Yesterday our second grandson was born - 5 days late just like his mother, and adorable just like his big brother.  His name is Jasper, a well-known name is Jimmie's family since it was shared by his father, grandfather and greatgrandfather.  (It skipped Jimmie which is another story entirely.)   When I excitedly reminded Cole that he got the baby   brother he asked for he quickly corrected me. "I didn't say baby brother, I just said brother."  Later he agreed wholeheartedly that he liked Jasper, then continued, "but it would be better if he  could talk."  Ha!  I had long suspected that Cole was envisioning a slightly older version of a sibling than what was arriving.

What arrived today was our wedding anniversary, but I never expected to be celebrating quite as we did.  We spent the majority of the day in the Emergency Room of the local hospital here.  Jimmie began coughing up blood yesterday and it continued early this morning, so his oncologist in Georgia wanted him checked out immediately since such can be one of the more serious, life-threatening side effects of the chemo Jimmie is taking.  Being so far from home complicated matters a bit, but the hospital staff were running in circles very quickly.  They were literally standing in line outside his exam room waiting to do things to him.  Inside of 2 hours Jimmie had been jabbed 4 times, X-Rayed, EKGed, Cat Scanned and had an IV of antibiotics started.  We left there another  2 1/2 hours after that exhausted, semi-frozen and not knowing anything more than when we arrived.  But there has not been anymore blood since early this morning so we're praying it was something that has passed and won't show again.

Posted by Linda Hill at 8:00 AM No comments:

We saw Jimmie’s oncologist today for the report on last week’s CT Scan – and it was as GOOD as we had heard it was going to be!  Still, it was good to get it in print so it's official now.  All but one of the cancer nodules had shrunk from 5 to 10%, and a few had disappeared.  After the disheartening report in March the doctor had been frowning whenever Jimmie’s Africa campaign was mentioned, but based on this new scan he was smiling again.  He said there should not be a problem with Jimmie going – so you know Jimmie is smiling, too. 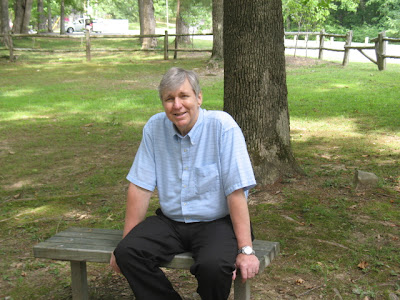 Phone calls from doctor's offices tend to make me tense.  In our experience if the doctor calls you out of the blue bad news quickly follows.  Well, we got such a call yesterday that was an exception to the rule.  We did not get any details yet, but the doctor's assistant called just to say the report on Monday's CT Scan is GOOD.  The cancer has shrunk!  We will get the full report next Monday, but we are rejoicing today.

We are also rejoicing because Jimmie started his 2-week break from the chemo yesterday . . . apparently just in time.  This past weekend Jimmie developed a new side effect from the medicine that was scarier than the rest have been, internal bleeding.  We didn't realize at first that's what it was so we didn't call the doctor until late Monday (as luck would have it, just minutes after the nurse's line closed for the day.)  So on Tuesday when the nurse was telling me on the phone that Jimmie had to come in right away and not to take any more of the chemo, Jimmie had already swallowed his last pill of this round.  And on Wednesday with no medication, the bleeding stopped.  We just pray that particular side effect doesn't crop up again.

Jimmie had a new CT Scan Monday morning at the crack of dawn . . . okay, so 9:00, but we had to get up at the crack of dawn to be there since we had to first go to his oncologist for more blood work.  Naturally, it had to be before the scan since Jimmie gets injected with dye that would do crazy things to the blood work.  Poor Jimmie.  I think that made 4 needle jabs today.  But maybe the CT machine made up for that.

Most of Jimmie's previous scans have been at the imaging center in an auxiliary building  for the hospital, but they were booked today so we had to go to the hospital proper.  Since the two centers are both run by the same hospital I would have expected things to be pretty much the same, but Jimmie declares they were quite different.  Of course, paying to park is different.  And their procedures were all different.  But even the scan was different.

Jimmie had gotten used to the clear, calm recorded American voice quietly giving directions to patients in the other CT machine, so he was surprised when this one suddenly issued very energetic, enthusiastic commands.  Even more so since those commands came with a strong Australian accent and phrasing.  At least it kept things more interesting.  But Jimmie mimicking that voice on the way home?  That made getting up at the crack of dawn worthwhile!

Actually, only 1/2 a week now to finish this second round of Sutent.  Bright and early next Monday morning Jimmie gets a new CT Scan, but it will be the week after before we receive the results.  Next week will be a very long one as it always is while waiting to hear something.

But this past weekend was very good.  We drove up to Cookeville, TN, on Friday to see our co-worker and director of IBTM, Ronald D. Gilbert.  I helped him with some computer projects but mostly we enjoyed some good cooking by his wife, Carolyn, and a great visit with them. 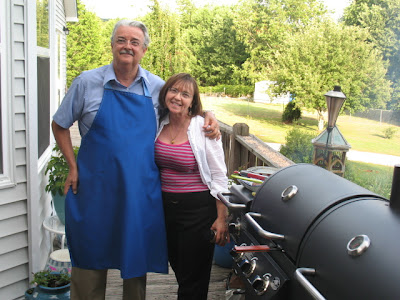 Jimmie and Ron discussed some work stuff, but they were soon swapping campaign stories.  I love listening to those!  They figured out they have done at least 12 together, so they each had some good tales on the other.  I still shudder when I hear the one about Jimmie throwing rocks at "something" in the lake a few feet away from them to see if it would move, and then realizing it was a live crocodile watching them.

On Sunday we drove another hour up to Tompkinsville, KY, to the Rock Valley Church of Christ that sponsors Ron's work with IBTM and is a tremendous help with the work. 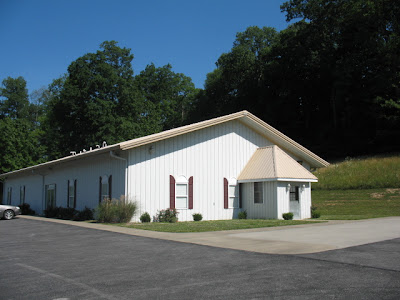 Jimmie spoke twice, preaching at the morning worship and then presenting the work of IBTM in an afternoon session to which other area congregations were invited.  In between there was a delicious fellowship meal (Jimmie is STILL talking about the banana pudding!) and a work session to get 1,000 Bibles ready to ship this week.

Tompkinsville also has another building we were interested to see - the oldest church building in the area.  John Mulkey (1773 - 1844) was a Baptist preacher from a well-known family of Baptist preachers.  But as he compared his reading of the Bible with the Baptist doctrines he taught he began to realize that his doctrines were wrong.  In 1809 he began to express his change in sentiments from the pulpit and caused quite an uproar.  After months of dissension and visits from Baptists delegates John Mulkey arose on the 2nd Sunday of November and asked those of the congregation who agreed with him to walk out the back door.  He joined them and together they started a congregation of the Lord's church based solely on the Bible. 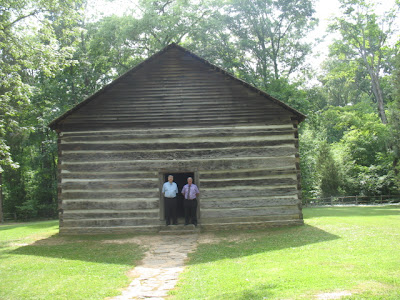 Everything is still original other than the flooring.

Ron said that for many years the state of Kentucky had a plaque up identifying this church as the one you read about in the New Testament . . . but apparently there was a protest by someone and the plaque was removed a few years ago.

Naturally, Jimmie always checks out the pulpit.  This one was a bit different, more like a retaining wall. 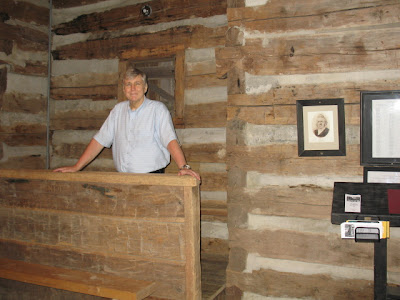 I found this site fascinating for another reason as well.  It seems that one of my distant relatives was a part of the original congregation and her grave is in the adjacent cemetery. 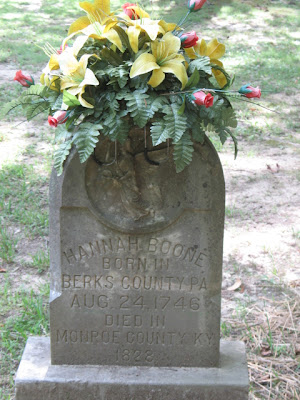 There is a plaque commemorating the life of Hannah Boone Stewart Pennington (1746 - 1828) and her headstone was the only one freshly decorated.  Even though she buried two husbands she is still known here by her maiden name of Hannah Boone, probably because her brother's name was Daniel.

The mother of Daniel and Hannah Boone was sister to one of my great-grands so that makes us very distant cousins.  I was pleased to learn that a cousin had been a part of the Restoration Movement all those years ago. 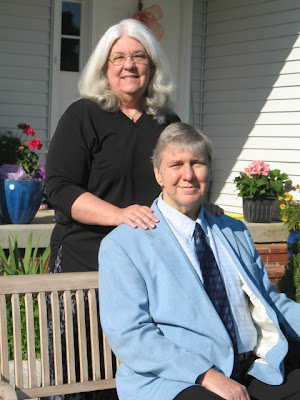 and then stopped in Crossville, TN, to see Jimmie's brothers before heading back to Georgia.  So, it was a very good trip.