July was quite a month. A few days before Jimmie's cancer surgery a major storm front moved through Dacula bringing with it hail and tremendous wind and rain. It was the rain that got us the worst. 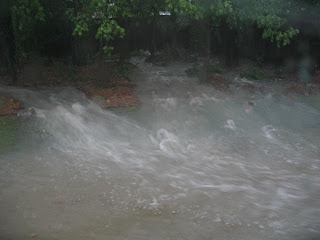 The old house behind us had recently been demolished and the land regraded for future construction, but the planned retention pond was completely forgotten before the new owner dropped the construction idea and put the now vacant land up for sale. So ALL of the water on this higher property came straight at us rather than down the storm drains where it used to go. The deluge knocked down a tree, wrecked our yard and destroyed our privacy fence. 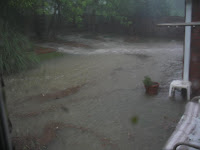 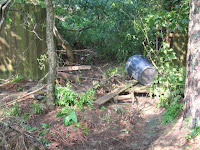 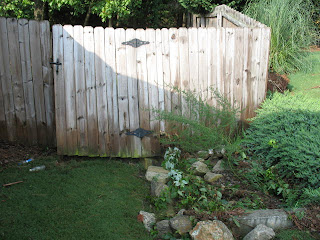 It also flooded our home.

Jimmie and I were armed with every towel and cloth we owned and were each manning a door as we saw the water rising above our fish pond outside. But when the water started invading the house it came at us everywhere at once through the foundation. It was like a bad sci-fi movie from the 1950's. Water 1/2 inch deep soon covered our living room, dining room, kitchen and master bedroom. 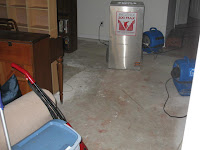 Jimmie and I continued to fight the water while waiting for help to arrive, but it was a wasted effort. The floors throughout most of our house had to be ripped out, as well as baseboards and some wall board. The water disaster crew even drilled holes in all of my bottom kitchen cabinets to dry the water. When they left at 2:30 AM the next morning we truly were living in a disaster area but now with 18 fans and 2 huge dehumidifiers adding to the confusion.
The 2 small front rooms were still intact so Jimmie did not want to move to a motel or one of the many homes offered to us by the wonderful brethren at New Hope Road. We camped here and ate take-out since the kitchen was completely inaccessible as we tried to start some clean-up. My primary concern was getting the debris removed quickly so that I would have somewhere to bring Jimmie after surgery. With the help of some wonderful friends we did that. Bruce and Bev Roberts drove down all the way from Pennsylvania to lend a hand, even bringing their own bed so they would have somewhere to sleep. The youth group from New Hope Road - William Howard, Seth Howard, Nathan Howard, Robert Rogers, Steven Rogers, Carl Jenkins, Bill Fancher, & Joseph Fancher - took care of the debris in the back yard, working right through another storm and refusing to stop, while Katrece & Lydia Howard helped inside the house. Another dear sister, Emily Jester, brought us a carload of large throw rugs to cover the bare concrete.
We have not started any reconstruction yet - that would be another disaster waiting to happen until the property behind us fixes the problem that caused this one - but at least the house was livable again before Jimmie returned from the hospital. For that I can't thank these dearly loved brethren enough.