I completely skipped last week - and for once the chemo infusion was not the highlight of the week.  Our grandson, Cole, was here so there were just too many exciting things happening to think about this blog.  On Wednesday we took him to tour a fire station, and the firemen took him for a ride in the fire engine.  Then they got a call as we were about to leave, so we even got to watch them peel out with sirens blaring.  Wow!  It sure made his day. 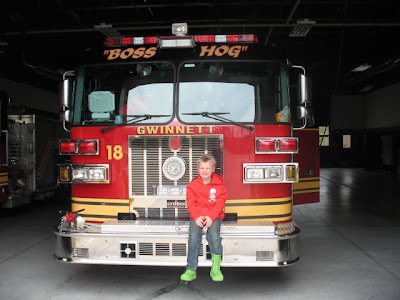 Thursday & Friday we camped by a lake.  I handled the kitchen duties while Jimmie & Cole fished . . . and fished . . . and fished.  As they came in for lunch after Cole's first lessons in the art of casting he bragged to his Grandad, "I did pretty good, except when I wrapped the line around your legs, and when I hit you in the head with the bait, and when I almost cut your head off."   But Jimmie decided that Cole has fishing in his blood - he never tired of it.  Especially after he landed his very first fish! 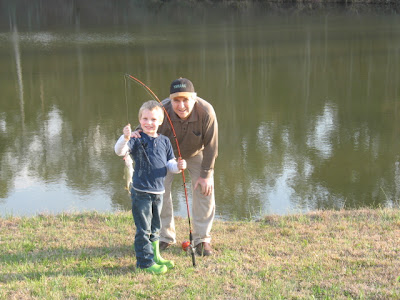 Cole quickly started wishing that he might catch 5 to match his age - and he did!

The camp out was wonderful.  I think it was the first "just for fun" trip we have made since Jimmie got sick last  June.  Jimmie enjoyed catching a few bass himself - 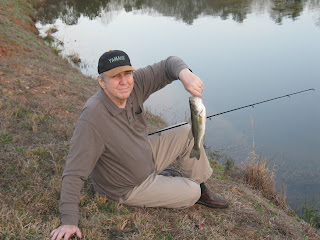 but he was much more excited about teaching Cole. 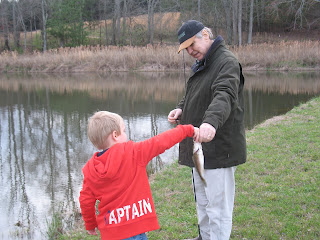 This Monday found us back at the oncologist for the weekly infusion of chemicals and some excitement of a different sort.  Jimmie was almost done with the bag of meds when he noticed that his arm was swelling rapidly.  It may have been the pain that got his attention.  The nurse sprang into action removing the IV immediately.  She called it "getting a bubble" but it looked more like a small balloon to me.  Jimmie's vein had collapsed so all the medication was flowing into his tissue instead of his blood and simply collecting a few inches below the injection site.  I had no idea such a thing could happen.  They soon had Jimmie's arm packed in ice - in fact, we came home that way - and slowly the "bubble" began to deflate.  But then they had to stick his other arm to finish the IV.  So yesterday was a 3-poke day. Ouch! (They always take blood tests first thing to confirm he is well enough to tolerate the chemo.)

The doctor also decided that all of the sores that have been breaking out all over Jimmie's body - he seems to get more with every infusion - was from a fungal infection caused by the chemo.  He did some checking on the best treatment, then called in a prescription at the drug store.  We picked that up today and Jimmie burst out laughing as he read this on the packet cover:  "Your doctor has prescribed fluconazole for a vaginal yeast infection."  Wow!  Talk about wrong!