I heard a report on mission work in the Pacific Islands tonight - an instant recipe for nostalgia.  I thoroughly enjoyed living there and still delight my grandson, Cole, with stories about Samoa.  I tell him about the men wearing skirts, tatoos made with a shark's tooth, and houses that had no walls.  I've described the men cooking in the underground umus on Sunday mornings so that the whole island seemed to be filled with a smoky haze.  I've talked about drinking coconuts fresh from the trees, his Grandad eating octopus straight from the ocean., and another octopus that my sister, Carolyn, won't soon forget.  It sat whole in a bowl, cooked in its own ink and coconut milk so it appeared to be swimming in grey gunk each time the dining table was jiggled.  It swam quite a while beside my sister's plate before she got enough courage to sample a tentacle - an absolute must since the dish had been made by our Samoan friends especially for her.

Cole has heard about Hurricane Ofa that hammered us with horrific wind and rain for 3 days and left us without power or water for long after that.  I've shown him pictures of the Flying Foxes, the world's biggest bats, and told him about the giant centipedes that were terrifying when they got in our house.  I think I have even told him about how in the beginning I repeatedly got lost driving on the island even though there was only one road that went from end to end.  (Palm trees all look alike.  I would just forget which way to turn on that one road when I came back out of where ever I was.)

This week there was a new story as I unpacked yet another box to discover 2 starfish.  Julie had played with those starfish when she was younger than Cole on a day when the beach seemed to be filled with them.  It was the day that we first walked on the coral reef and discovered how awesome that can be with hundreds of brilliantly colored tropical fish swimming around your feet.  Still, we lived in Amerika Samoa for 5 years, so there are more stories to come.

Yet when I think about the island of Tutuila it feels like an incredibly long time since I've been there.  It came as a bit of a shock this evening when it suddenly occurred to me that it has been only slightly more than two years.  Jimmie and I were on Tutuila in May of 2011, our last campaign together.  So much has happened since then.

But, the place I'm living now has a few perks as well and no doubt stories for the future.  I especially like losing the heavy traffic jams.  After living in the Atlanta area for 14 years not being stuck in constant traffic either inching along or screaming down the interstate at 80 mph is wonderful.  And I like this quaint, old-fashioned town filled with homes from another era and open friendliness that I had forgotten existed.  And, of course, having Julie & gang so close is a wonderful perk all by itself.

Still, few places can compete with a South Pacific island for beauty. 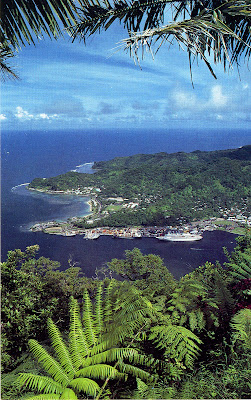 I loved the article. I know it must be sad for you.
Love you, Carolyn