It is barely more than a week into the new year, and already it has brought something new in several categories.

And I found one, a cute little chocolate Rat Terrier that had just been dropped off at the Humane Society by her owner.  I was the first to apply to adopt her and was told it would take 24 - 48 hours before I could take her home.  Two weeks later after many phone calls and an email query that they never responded to, I found out via Facebook that the dog had been sent home with someone else.  That place may be good with animals, but they stink at human communication.

But this story still has a happy ending because Julie found another little dog at a pound about 2 hours away that she thought I might like.  The problem there was that this little dog was on death row, scheduled to be put to sleep two days later.  She had been picked up as a stray so nothing much was known about her, but they thought she was a Feist Terrier mix about 1 year old. She also had the same coloring as the Toy Fox Terrier I had as a kid growing up, so Julie was right.  I brought her home last Saturday. 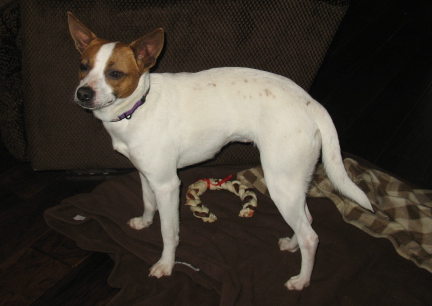 I named her Sadie, partly because I was looking for an old-fashioned Southern name since Feist Terriers were bred as hunting dogs in the rural South.  But I also liked the name because that was a restaurant Jimmie and I enjoyed in Amerika Samoa.  Sadie was very quiet and scared on the long drive back.  She was super excited during the shopping stop at Pet Smart, realizing immediately that the new dog bed was hers.  And she has been very happy and loving since arriving at her new home.  But I quickly learned that when she gets excited Sadie is a bouncer.  She jumps for joy, bouncing up and down just like Cole on his new pogo stick. 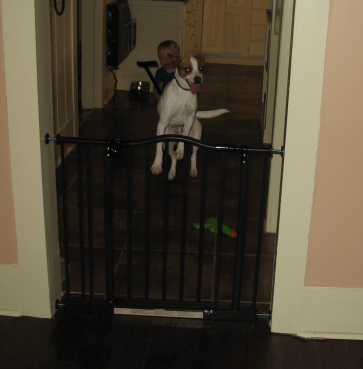