The heat has been extreme this week, but Cole managed to stay cool while playing outside at the Mall of Georgia on Tuesday. 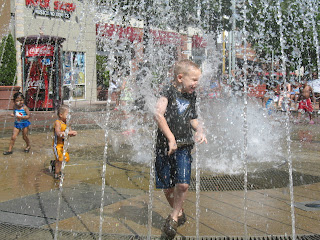 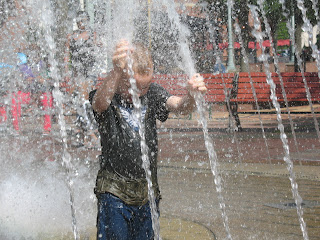 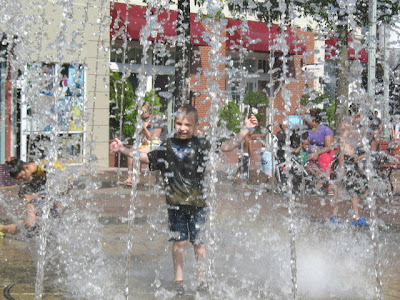 The fountain was a popular spot and Cole was in no hurry to leave.  I think it safe to say that he had an absolute blast playing in the water.

Jimmie's fatigue has also been extreme this week but without an easy remedy.  His white cell blood count was so low on Monday that the doctor immediately cancelled the shots for Monday & Wednesday nights.  It is strange but each chemo has done something to Jimmie's blood, but a different something.  The first was known to hit the red blood cells.  The second did that as well at times but was more prone to drop the platelet counts.  Now this one zinged the white blood cells.  Yet the doctor was startled that it happened so quickly, after only 2 doses.  He thought perhaps he started the medicine too soon after stopping the last chemo.  Tomorrow we go for labs again to see if he can start back on the shots.

Today Jimmie had a 9:30 MRI appointment that was supposed to take about 40 minutes to do, which worked great because he had a second appointment in the same building for another test at 11:00. One hour and 15 minutes after they took Jimmie back to the MRI machine I finally asked at the desk if there was a problem.  That's when I learned that they had taken Jimmie to the hospital for an X-ray first.  I must have looked as startled as I felt because the receptionist assured me that the MRI was almost done, just another 5 minutes or so.  So, we could just make the other appointment.  At 11:00 the receptionist checked again, then notified the doctor upstairs we would be about 10 - 15 minutes late.  45 minutes after that Jimmie finally emerged looking even more exhausted than when he went in.  But we still had to head for the elevator and test #2.

By then Cole's fountain was sounding pretty good to me.  They need to have one of those for adults.