I remember a time when you had to have a degree to give a shot, or at least special training.  So when I learned that this new medication Jimmie has to inject into himself 3 times per week comes with a vial and a syringe  that we have to fill I remarked to my sister that this chemo thing was getting too "medical".  We both laughed . . . but that was before I actually opened a box and discovered that we also had to make the medicine.  Dear me - way too medical.  The nurse gave me a quick course in how to attach a needle to a syringe before I left the doctor's office yesterday with this huge Styrofoam cooler filled with ice and small prescription packs.  But last night I was suddenly wishing for a nursing degree. 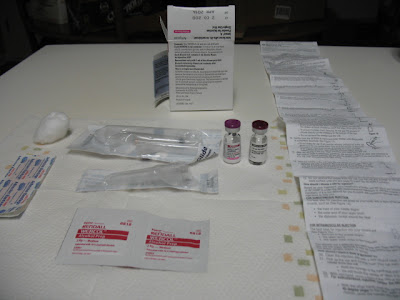 The packet that went with each dosage contained a syringe, 2 needles (?), 2 alcohol swabs, and a band-aid.  (I was told to find my own cotton ball.)  The prescription box held 2 tiny vials and some instructions - a very good thing since preparing the syringe fell to me.  But the list of instructions was quite literally longer than my arm.  The list of steps was very detailed, from first sterilizing my work area to disposing of the paraphernalia.  I suppose my main concern was getting air in the injection - something the nurse had said not to worry about but I've seen all those murder mysteries where the victim is killed by a single air bubble.  Naturally I got a stubborn one but it finally came out.  Yes, the whole thing had me seriously stressed.

The doctor had said the med might make Jimmie feel bad for a while.  The prescription brochure said the most common side effect was flu-like symptoms.  Neither really gave a clear picture of what to expect.  Fortunately, the nurse told me that it was common to run a fever of 101 degrees or higher for 8 - 10 hours after injection and suggested starting Tylenol BEFORE the shot..  I'm very glad of that or I would have been totally freaked out at how sick Jimmie got through the night.  The idea of sleeping through the worst of it really does not work.

Linda, sometimes the medical field does not give the layman enough info! I am a nurse, we met you all at the WV SOP lectures some years ago. You probably have 2 needles, if you have to mix the med. Like you have to add sterile water to the vial of powder. They probably want you to use one needle to inject the water and then discard that needle and after the med is made liquid use the other needle to draw it into the syringe. Or you may need to change the needle after you have drawn the med into the syringe. The med itself, if it is on the needle might tend to irritate Jimmie's skin and subcutaneous tissue. We are just this month getting our first Medicare Wellness appointments. My papers that I had to fill out were more fall risk assessment, but when hubby brought his home, they were really medically detailed. We commented that the average little lady on the street would have no idea how to fill that ream of paper out. Taking the tylenol before Jimmie's inject is a good idea. When I worked in a dr's office we also gave our patients a couple of tylenol before giving them the flu shot and the same when I worked in the nursing home. Each resident got two tylenol before the flu shot.

Thanks!! Now I know who to ask!