There have been a variety of memorials for Jimmie since his passing more than two months ago.  Besides the services held here and in Malawi there have been tributes both written and in song.  And each time I get word that another IBTM online student has put on Christ in baptism I mentally give Jimmie part of the credit because he was the one wanting so badly to get the courses going as part of the IBTM Internet work.  But this week I saw a small memorial to Jimmie that, to me, was the sweetest.

Jimmie had been a collector of coins and foreign currency for many years, a hobby he picked up during his travels.  Last Christmas he wanted to pass this hobby along so he bought our grandson, Cole, a U.S. Quarter map that includes both the states and territories.  Jimmie also provided a bit over half of the coins needed for the map, so I have pictures of the two them beginning to fill it.  Then Cole continued to search for coins with occasional help from Grandad.  Yet, last August 23rd Cole still needed 5 states to finish it.  Suddenly, finding those remaining quarters became an urgent quest, but they were proving hard to find  Then Monday Cole got the last one.  He was so excited he practically flew on his way to show me!  Then minutes later he mentioned the reason why this quest had become so important.  "If Grandad knew I bet he would be really happy right now!"  I agreed.  I'm sure he would. 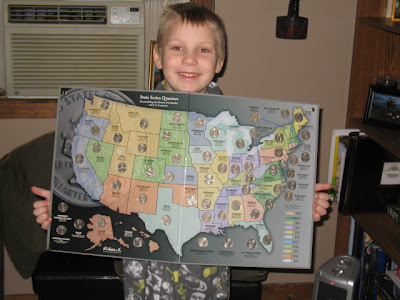