It was time for another round of good-byes again this morning.  That is the  #2 worst thing about campaigns - getting sick far from home would definitely be #1.  But the Odonells have been wonderful hosts and took good care of all of us.   I'm just sorry that I spent so much time sleeping that I didn't get a chance to know them better because they have 4 of the sweetest kids you would ever want to meet.  I hope we get to see them again when they come to the States in the fall.

The drive back to New Plymouth was in the rain again so we still didn't get to see the mountain that's on all the post cards, Mt. Taranaki.  That's a shame because the pictures I've seen are pretty amazing.  We did pause at the coast long enough for me to snap a picture of a black sand beach littered with drift wood that I found interesting. 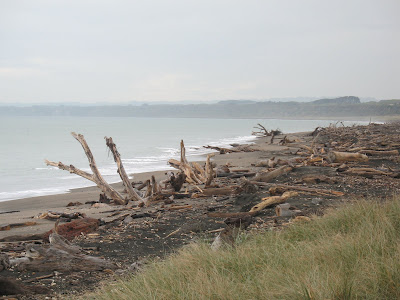 But the gorgeous countryside we passed with cows and sheep often perched on steep green slopes was encased in too much haze to be photogenic today.

We stopped at a McDonald's in Waganui for a bathroom/coffee break and Ron got a surprise.  He ordered coffee with cream expecting a packet of whitener with the same paper cup of black coffee that Jimmie had just walked away with.  Instead he was told that they would have to bring it to the table.  A few minutes later a huge china cup arrived that had a floating mountain of whipped cream on top.  The look on Ron's face was definitely worth the extra cost!

We arrived in New Plymouth and started retracing our steps back to the car rental agency . . . and that's when our GPS had a glitch.  Ron had been doing the navigational duties while Jimmie drove and you would think that coming back would be easy.  But Ron quickly realized that the google maps printed by the car dealer to get us to Palmerston did NOT include the section of New Plymouth we were coming back to.  We wandered about for 45 minutes or so with Jimmie making U-turns and Ron "recalculating!"  Finally, sitting at an intersection where we had been at least 4 times, Jimmie just happened to spot the name on a billboard and zipped right in.  The agency was hidden in behind a carlot and not visible from the main road.